Today we know that the importance of the environment in the prognosis and evolution of people with mental illness is of the utmost importance. We know that whatever mental illness is, it is not a closed entity in itself that evolves according to internal rules, but a dynamic entity in whose evolution the environment plays a very important role.
One of the most curious findings of the early days of psychiatric epidemiology was that the prognosis of people with mental illness was better in developing countries than in developed countries (1). The interpretation of this finding suggests that, given that the diagnostic criteria were common, the differential factors (cultural, religious, or social) operated as more protective in countries with lower incomes in relation to the higher income countries.
Another example of the importance of the environment as a factor in evolution was Leff and Vaughn's finding  (2), who showed through their Expressed Emotion construct the importance of the relational style of the family in the prognosis of the disease.
Many indications such as these have emphasized the importance of the environment and the notion of "community", basic in the "community" approach to mental health, in opposition to the conceptually obsolete "institutional model" - although still in force in many countries of the world .
However, the notion of "community", so that it is not an abstraction, needs to be specified in a network of services. It has been in that direction as the model has been developing and how numerous experiences and community care attention programs have appeared for more than 40 years.
Examples of these services can be very numerous: community mental health services, Community Outreach Treatment, early intervention services for incipient psychosis, community rehabilitation services, special services as an alternative to hospitalization, crisis or home support teams, day hospitals, residential services and residential alternatives to long-stay hospitals, or employment support programs.
At the recent meeting in Luxembourg of the EUCompass group, a report was presented (3) that included detailed analysis and an assessment of effectiveness and cost effectiveness of multiple different models and practices of community care in mental health in countries of the European region, whose conclusions are interesting to review.


Although conceptually clearly obsolete, the institutional model - psychiatric hospitals that consume most of the resources in the care of a limited segment of the people in need - this model still remains in practice in many countries.
In general, the reforms of many countries towards the community model have produced enormous advances, especially in the improvement of the living conditions of long-stay hospitals, in the development of accessible community services, in the integration of specialized services with services primary, in the protection of the human rights of people with mental disorders, and in the incorporation of users and family members in the improvement of services and policies.
The community model proposes the transfer of resources from psychiatric hospitals to community programs. To date, the transfer of services has been only partial in most countries and regions.
In general, the most important progress has been made in the placement of psychiatric services in general hospitals, followed by the creation of outpatient services in hospitals and in the community.
Progress has been less in the implementation of primary health care services in mental health, in the exploitation of the possibilities of home treatment, implementation of sufficient rehabilitation resources, mobile teams of assertive treatment, implementation of self-help groups in the community, and in the development of the new possibilities of e-technology.
The main barriers to the full implementation of the possibilities of the community model identified in the report remain the insufficient political priority that mental health receives in relation to the data that inform the real needs of the population and the effectiveness and cost indicators effectiveness of services. This is followed by the lack of consensus among the different interlocutors and cooperation between the social and health services, the difficulties to take advantage of the possibilities of integration of primary services in the mental health network, the absence of clear leadership in the sector and the resistance to change.
As facilitating factors, situations of clear political support, adequate leadership and governance and alliance with user and family organizations are identified.

The WAPR Madrid 2018 congress will feature José Miguel Caldas de Almeida, one of the speakers of this report, in a special Symposium on mental health policies in Europe.

The Hungarian Branch of WAPR, under de untiring leadership of Ida Kosza, has organised a special session in the IX Annual Congress of the Hungarian Association of Psychiatry (Magyar Pszichiátriai Társaság) January, 24-27 2018. The topic of the session was Postraumatic Stress Disorder and Psychosocial Rehabilitation.


The session included 6 presentations and open discussion. It was an opportunity to revise the state of the art of this topic. Presenters elaborated on different perspectives: current psychiatric evidence (Zeb Taintor, WAPR Past President), alternative approaches, sociologic approaches, psychologic approaches (focusing in CBT: Shahid Quraishi, WAPR Dep. Secretary General), Transgenerational Trauma (Ida Kosza, chair WAPR Hungarian Branch) and special aspects of trauma in relation with severe mental illness (my presentation).
In my presentation I showed that in the last 15 years there is an increasing number or papers exploring in different ways the relation of PTSD and Schizophrenia spectrum disorders. In this trend there is a number of core ideas that can be underlined. First, that PTSD and schizophrenia spectrum disorders (SSD) show a clear relationship: most patients meeting criteria for schizophrenia also meet criteria for PTSD (although this is mostly ignored); second, severe traumatic antecedents are clearly overrepresented in the biographic antecedents of those in the group of SSD, and this relationship seems “dose dependent” (children with high level of severe traumatic antecedents -i.e., incest, chronic sexual abuse or complex trauma- have more that 40 times probability to receive diagnostic of SSP later in life, different from those with “low level” of abuse), that only have twice probability of the same(). Last, those with traumatic antecedents (abuse, neglecting) have almost 5 times more probability to experience hallucinations.
Adding to my first conclusion (trauma increases probability to suffer from SSP), I suggested that suffering from – and being labelled of- mental illness is traumatic itself. And moreover, that there is a big amount of testimonies that declare that sometimes, aspects of treatment – coercion, forced treatment or side effects of meds- may be traumatising by themselves.
Different to those that consider relationship between PTDS and SSD as mere comorbidity, I joined those that suggest that the interpretations of this findings in research may imply that PTSD and SSD may share part of the pathogenic mechanisms, and that according to some literature, the classic concept called “dissociation”, coined by Pierre Janet and recovered by relational therapists among others, may be that core mechanism. This could be quite compatible with the findings by neuropsychologists. This also suits well with the trends that consider that the classic descriptive diagnostic criteria may benefit form updates that focus more in a dimensional approach to the clinical features of mental symptoms, similar to the diathesis – stress model.
My conclusions in this session were that for as primary prevention in mental health -but also for many other reasons- effort to protect children, women and families should never be overlooked. Second, that as many stakeholders claim -including WHO´s Office for Mental Health and Substance Abuse- globally speaking, psychiatry should make efforts to reduce to the maximum extent non-consensual interventions (i.e. detention, coercive pharmacological treatment). To what extent these interventions may be reduced non-affecting health and security of the person and others is today under big discussion. While users’ organisations claim that these interventions should be banned, some family organisation and professionals opine that taking it to an extent is unrealistic and that there are situations where the person needs external control and direction in order to recover control of his own mind and life and to preserve security. The more balanced opinion may be that these kind interventions can and should be reduced by improving professional training and procedures, and ensuring personal procedural guaranties.

Last, I reported that research shows that specific treatments for PTSD in SSD is effective in reducing specific posttraumatic symptoms in SSD – as hyperarousal, flashing memories or insomnia- and also – may be not surprisingly-  some symptoms of the SSD area, such as secondary negative symptoms.
Discussion focused in different aspects. Why we could consider that trauma may operate as a factor of developing SSD was discussed, on the basis of the Vulnerability Model. Some statements were presented on how difficult it is that child abuse may be properly detected, and how difficult it is that the health system may intervene in a effective way. The need of more public commitment, information and training for public servers was highlighted (not only mental health workers but also social workers, policemen, and judges).


These approach of trauma as a hypothetical contributor to de onset of SSDs, along with other social aspects and hypothetical contributors, will be discussed in the WAPR World Congress in a special symposium, “From genes to narrative”, proposed by Francisco Pulido from Spain and other colleagues from the Spanish Association of Neuropsychiatry (Asociación Española de Neuropsiquiatría).
en febrero 09, 2018 No hay comentarios: 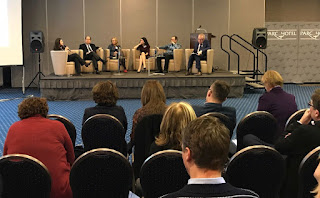